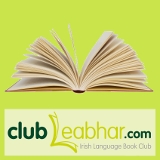 
ClubLeabhar.com, Gaelchultúr’s online book club, is up and running again after the summer break and four books have been chosen for the period September–December 2011. There is more information available below about those four titles.


“We got a lot of suggestions from many people regarding the next series of books on ClubLeabhar.com,” says Michelle Ryan, the project administrator, “therefore it was very hard to make a selection. We finally put together a list for the months leading up to December 2011 and I hope that existing members and people who haven’t yet joined will enjoy the works we’ve chosen.


“We’re very pleased to have over 700 members and more than 800 people following us on Facebook. We intend to attract more members to ClubLeabhar.com by developing it further between now and the end of the year. We’ll be adding video, for example, which will attract more people, we hope. These videos will feature interviews with book of the month authors and with well-known literary critics.”


ClubLeabhar.com was set up at the beginning of 2010 with the aim of encouraging people in Ireland and abroad to read Irish language books. Individuals can become members of this online book club but members are also encouraged to meet once a month in various locations around Ireland and in other countries to discuss that month's book. There is no membership fee.

We’ve chosen that gem of children’s literature, Eachtraí Eilíse i dTír na nIontas (Alice’s Adventures in Wonderland), as the book of the month for September. The original version of this celebrated book has been popular since it was first published in 1865. None of the humour or word play of the original text is lost in this excellent translation by the acclaimed scholar Nicholas Williams. When a phrase couldn’t be translated directly to Irish, the translator sought to replace it with its Irish equivalent. The original English version is available free of charge here and, as usual, an extract from the book and a comprehensive glossary are available on ClubLeabhar.com.

We’ve chosen a new collection of short stories for the month of October: Bás in Éirinn, edited by Aodán Mac Póilín and Róise Ní Bhaoill. The seven stories in this collection are among the foremost short stories in modern Irish literature. Works by Liam Ó Flaithearta, Pádraic Ó Conaire, Séamus Ó Grianna, Seosamh Mac Grianna and Daithí Ó Muirí are amongst those featured in the book. A parallel English text accompanies each story to assist the reader to practise and develop his language skills without having to endlessly consult the dictionary.

Eoghan Ó Tuairisc's historical novel L’Attaque will be November's book of the month. L’Attaque is a short, unusual and moving novel relating to the revolt of 1798 which was sparked by the landing of the French General Humbert in Killala, County Mayo.

Breandán Ó hEithir’s novel Lig Sinn i gCathú is our choice for December. This entertaining novel provides a humorous depiction of the problems faced by a disreputable student, Máirtín Ó Mealóid. Breandán Ó hEithir pokes a mocking but incisive finger at academic, religious, political and sporting circles – some of society’s most central groups.


All of the books in the series are available on www.siopa.ie. We’re always delighted to hear your opinions on the books of the month or on literature in general on the ClubLeabhar.com forum. And there’s no need to worry about your grammar or standard of Irish when you write on the forum.


If you’re not already a member of ClubLeabhar.com, you can register right now by clicking here.