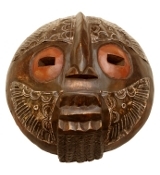 Technology tip of the month


It's a source of great disappointment when a website you're interested in disappears without a trace. But did you know that you can access old versions of websites which are no longer available by using services such as www.archive.org?


One very interesting website which is no longer available is www.hiberno-english.com. This site was an archive of Hiberno-English – that is, English which bears the influence of the Irish language – and contained many examples of phrases which are derived from Irish but which are still in use in English.


Helen Hegarty, the co-editor of this newsletter, did a little research into the Irish phrases which are still in use in her own parish, Newmarket-on-Fergus in County Clare.


“Of course there are some words which are widely in use: verbs such as 'olagóning' (wailing), 'útamáiling' (fumbling), 'plámásing' (flattering) and 'bladairing' (talking meaninglessly/cajoling), for example, and insults like 'liúdramán' (idler), 'amadán' (fool) and 'óinseach' (foolish woman). But my parents mentioned a few other insults that I had never heard previously; my mother, who is from Limerick city originally, spoke of referring to someone in a derogatory fashion as an 'aghaidh fidil' (a mask) and my father's sister mentioned the insult 'spreasán' (a worthless person).


“Newmarket-on-Fergus is a farming area and many of the words my father supplied relate to rural life,” said Helen. “He always spoke of the ‘riasc' as opposed to the marsh, and he doesn't weed ragwort, but rather 'buachaláin'.


“I was really intrigued by the phrases my parents provided,” said Helen. “All of them were listed in the online archive, and had I not brought up that topic with my parents, it's quite likely that I'd never have heard them. It's important to carry those phrases from generation to generation and not to cast them aside. Thanks to the influence of the Irish language, the English spoken in this country has a wonderful richness that other English-speaking countries don't possess, and it's very important to preserve that wealth of language. I'd recommend that anyone with an interest in languages speak to neighbours or older members of their families about words they use which have been derived from Irish in order to ensure that they're not lost.”


(1) In order to access the Hiberno-English Archive, just type the Web address www.hiberno-english.com into the space beside the word “WayBackMachine” at the top of the www.archive.org homepage and press “Take Me Back” (type the address after “http://").


(2) A calendar will open displaying all the dates on which a capture of the website was taken. Click on the year 2010 and then on the blue circle surrounding 11 February. An old version of the site, as it was on 11 February 2010, will open.


(3) Click on the tab “Archive”, go down to the bottom of the page and click on the word “here” in the sentence, “To search the archive click here.”


(4) The archive should now be open. The content is arranged alphabetically, so just click on the letter “A” at the top of the screen to access all the phrases beginning with “A”.