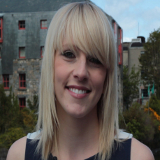 ‘Phrase of the Day’ gets its second presenter

Gaelchultúr uploaded the first “Frása an Lae” (Phrase of the Day) video to YouTube on the 14 March and there are now nearly 60 videos of that series available online. Until now, sean-nós dancer and television personality Sibéal Davitt was the only presenter to appear in “Frása an Lae” but from this week onwards there will be a second presenter: Máire Treasa Ní Dhubhghaill from Indreabhán in Conamara.


Although Máire Treasa is still only in her twenties, she is already a highly experienced broadcaster. She presents Rugbaí Beo and the arts programme Ponc on TG4 and she has also worked on Cúla4, Bog Stop and Wipeout in recent years. Máire Treasa recorded over 90 phrases for “Frása an Lae” in Galway city at the end of April and these will appear online over the next year.


“Frása an Lae”, which can be seen on Gaelchultúr’s YouTube channel, aims to give those interested in Irish an opportunity to learn lots of useful sentences that they can use in various contexts. The presenter says each phrase twice and it appears on screen for a few seconds as well, accompanied by a translation into English.


The “Frása an Lae” videos will be an integral part of the homepage of Gaelchultúr’s new website, which is set to go online before the end of this month. By March 2013, the company will have uploaded 365 phrases and the public will have access to this archive on a permanent basis. The phrases will appear online randomly but at certain times of the year sentences will be uploaded that will be relevant to a particular festival or day – Christmas, for example, or Saint Valentine’s Day.


“Gaelchultúr intends filming the remaining videos in Kerry and Donegal in the months ahead,” says Éamonn Ó Dónaill, Gaelchultúr’s Director of Education, “therefore there will be a variety of dialects and locations in ‘Frása an Lae’. We hope that these videos will help generate more interest in Irish among the general public, not only in Ireland but throughout the world. There’s a high level of interest in ‘Frása an Lae’ in the US and we’re confident that the videos will lead to people in that country and in many other countries learning Irish.”