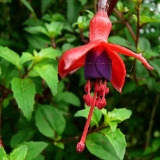 
We often fall prey to wanderlust in the summertime and if you have a week's holidays, some money to spare and, above all, a desire to learn some genuine Corca Dhuibhne Irish in one of the most beautiful and most linguistically rich areas in Ireland, you should head for Oidhreacht Chorca Dhuibhne in Baile an Fheirtéaraigh.


Oidhreacht Chorca Dhuibhne is a cultural and heritage organisation which is located in the heart of the Kerry Gaeltacht in the south-west of the county. The organisation was founded in 1980 with the aim of preserving, sustaining and promoting the linguistic, cultural, literary and archaeological traditions of this Gaeltacht area in the interest of the local community, as well as that of tourists and visitors to the region. Oidhreacht Chorca Dhuibhne offers Irish language courses at four different levels, from beginners level to that of accuracy in Irish, during the months of July and August. In addition, courses are organised which seek to improve fluency through the study of the literature of Corca Dhuibhne.


During each programme, formal Irish language classes are held in the morning from 9.30 a.m. to 1.00 p.m. Then in the afternoon, from 2.00–5.00 p.m., learners have the chance to take part in a wide range of cultural and language activities – conversation circles, for example, card games, singing workshops, trips, walks and many other such events.


You won't be idle in the evening either as many events - céilís, music sessions, dramas and lectures, for example - are organised for the students.


Rob Forde has been attending Oidhreacht Chorca Dhuibhne's courses for several years now and is very taken with the place and with the organisation.


“I really enjoyed the courses I've done with Oidhreacht Chorca Dhuibhne to date,” says Rob. “The standard of teaching is very good and the staff are keen to help learners find accommodation and so on. The local people are always very welcoming to visitors too, which really adds to the learner’s experience in the area.”


Oidhreacht Chorca Dhuibhne also organises a range of specialised courses which are aimed at people who have a particular objective to fulfil with regard to Irish: university students who are studying the language, for example, trainee primary school teachers or those preparing for entry interviews in the colleges of education. During the year, Oidhreacht Chorca Dhuibhne also provides courses which give learners the chance to improve their Irish while participating in different activities. Examples of such courses include “Irish, Poetry and Art”; “Irish and Heritage Walks”; and “Irish, Walks and Food Tasting”.


If you've time to spare in the Corca Dhuibhne area, there are many interesting things to see in the locality: Músaem Chorca Dhuibhne (the Corca Dhuibhne museum) in Baile an Fheirtéaraigh, for example, Ionad an Bhlascaoid (the Blasket centre) in Dún Chaoin, or An Lab, the Irish language arts centre which is situated in An Daingean.


Learners organise accommodation for themselves but an accommodation list is available on the Oidhreacht Chorca Dhuibhne website. Our thanks to Maura Hickey and to Oidhreacht Chorca Dhuibhne for the beautiful photographs used in this article.