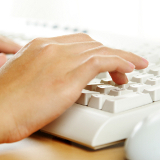 Technology tip of the month


When typing, it's better to keep certain series of words and certain series of letters together rather than splitting them between the end of one line and the beginning of the next. The second example below, for instance, in which the author’s first name and surname appear side by side and the word ‘n-oidhreacht’ appears in its entirety on one line, looks much neater than the first example. There’s a very simple and effective trick to control wordwrap at the end of a line when using Word or other word processors, i.e. using nonbreaking spaces and hyphens.


Creating nonbreaking spaces: If you want to keep two words together on one line, type the first word of the pair, then, keeping one finger on the “Ctrl” key and another finger on the “Shift” key, press the spacebar, and then, finally, type the second word. Both words will remain together and will move as though they are one word.


Creating nonbreaking hyphens: If you want a hyphenated word to appear in its entirety on one line, type the segment that appears before the hyphen, then, keeping one finger on the “Ctrl” key and another finger on the “Shift” key, press the hyphen key, and then, finally, type the second segment of the word. Both parts of the word will remain together and will move as though they are one word.


That’s a fine trick that not many people know. Self-satisfied techies will never have reason to recommend Word for Dummies to you again!

Note: More tips on technology are available in the course Tusa agus do Ríomhaire (You and your Computer) on Gaelchultúr's e-learning website, ranganna.com. To try a sample unit from that course, please click here.