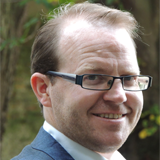 Get to know our teachers 3: Pádraig Ó Beaglaoich


Pádraig Ó Beaglaoich, who was born in Donegal but raised in Galway, has been teaching with Gaelchultúr since February 2015. When he isn’t teaching Irish language night classes with Gaelchultúr, Pádraig teaches secondary school students in Gaelcholáiste an Phiarsaigh in Rathfarnham. Nuachtlitir Ghaelchultúir spoke to him recently to find out more about his background and about his experience teaching both secondary school students and adult learners.


1. Tell us about yourself.
My name is Pádraig Ó Beaglaoich. Though I was born in Donegal, I was raised in Galway. My parents are from Kerry – so you could say that I am well-acquainted with the west coast of Ireland! There was always a great emphasis at home on the importance of identity and heritage. We were very involved in the Irish language community, in cultural events and in GAA games in our local area in Salthill.


Before they went travelling about the country, my parents worked in the Civil Service Commission in Dublin. I suppose it was there that the flame of romance was ignited! They have four children and strangely enough we’re all based in the east of Ireland now. I spent the majority of my life so far in Galway but I’ve been living in the capital now for the past five years. I’m a secondary school teacher at the moment, but I’ve also spent time working as a translator and doing youth and community work. I really like the variety of opportunities and activities available in Dublin, and when time permits I attend as many cultural events as I can. The biggest downside to living in the city is the cost of living and the house prices!


My parents decided from the offset that Irish would be the first language of the household and that we would all be educated through Irish. The majority of my friends and acquaintances outside of the house were English speakers, however, so I was brought up bilingually. I remember at the time that my father was working with the Department for the Gaeltacht and we often met native speakers and spent time with him in the Gaeltacht, when he was inspecting the Irish summer colleges. My mother wasn’t raised with Irish but she made a huge effort to improve after she got married. It was no mean feat but she managed to reach a high level of competency in the language through regular hard work. I’m extremely grateful that they made such a wise decision about the language almost forty years ago!


2. How did you start teaching Irish to adults?
I used to do private grinds in Galway some years ago and that was the first time I taught professionally, really. Adult students would be sitting the Leaving Cert again (as they still do) to get a higher level qualification in Irish – so that they could get onto a training course in primary education. The work was quite challenging, as I was dealing with students that hadn’t spoken, read nor written a word of Irish for years. It was enjoyable, all the same, and I was fascinated by the range of people with diverse professional backgrounds who came to me – adults with qualifications in specialised areas such as law, engineering, medicine, computers and the sciences. The Celtic Tiger was falling apart about this time and the employment (and unemployment) landscape of the country was changing drastically.


I undertook the Postgraduate Diploma in Education in NUI Galway in 2010/11. It was a few years after that that I started teaching Irish to adults again. I have a full-time day job as a secondary school teacher but I have to say that I missed working with adults and the atmosphere in that kind of classroom. That was why I contacted Gaelchultúr and it so happened that they were looking for teachers at that time. During the teaching terms I normally teach one night a week. I couldn’t commit more time than that as I’m heavily involved in a lot of other things in a voluntary capacity. 3. What do you like most about teaching adults? Is there a big difference between teaching school children and teaching adults?
The thing I like most about teaching adults is that everyone has a different reason for doing the course in the first place. As well as that, every student comes from a different background and has something different to offer in regards to the opinions they voice in class and the strength of those opinions. This all adds to the debate in the classroom, which can certainly be very animated at times!


There are some differences between teaching school children and teaching adults, alright. The biggest difference is that adults are there voluntarily, whereas it’s compulsory for children to attend school. Another difference is that I see the students in school five days a week, Monday to Friday. That’s not the case with the other classes, where I wouldn’t see the students for a whole week. One of the most significant things that I have noticed about adult learners of Irish is the regret a lot of them feel that they didn’t make bigger effort with the language in secondary school. It’s clear that many of them have difficulties recognising the huge value of having a high level of competency and fluency in Irish. This understanding doesn’t come to them until they’re older, apparently. At every level of education, you have to make extra efforts to get a positive message across regarding the value of the language and the ways in which it can be used.


4. What activities not connected to the Irish language do you have an interest in?
I love to travel and to learn about other cultures. “Bíonn siúlach scéalach” (A traveller has many tales), as they say, and I’ve seen a good bit of the world. I spent the Christmas holidays with my wife in Cape Verde – a beautiful archipelago off the west coast of Africa that has its own post-colonial challenges. It was hard to leave the good weather behind us, I have to say! Everyone always has new places to add to their list and I will be visiting Brazil over Easter. I watch films regularly and I also like to read books. I keep a sharp eye on current/political affairs and on the latest stories in the paper. It'll be interesting to see what will happen in the upcoming general election.