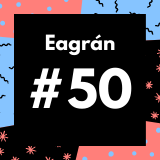 It's hard to believe that this is the 50th edition of our newsletter. We have come a long way since our first one in 2010! We would like to take this opportunity to thank all of our readers, and we hope you continue to enjoy future editions.


On the publication of the 50th edition of the Nuachtlitir Ghaelchultúir, we look back over the highlights of the past 10 years!

The first edition of Nuachtlitir Ghaelchultúir was published ten years ago, in June 2010, and over the years we have organised a lot of exciting events and welcomed many special guests. In early 2011 Mícheál Ó Muircheartaigh was the special guest for the launch of Gaelchultúr's evening classes. He regaled everyone with anecdotes from sport and public life at the launch, which attracted a huge crowd. The evening classes have been going from strength to strength ever since! 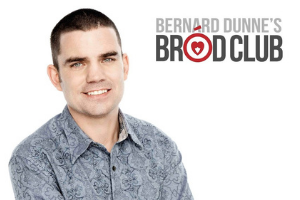 We were delighted to establish a link with another famous face from the sporting world back in March 2012. Bernard Dunne began an ambitious campaign to encourage 100,000 people in Ireland to commit online to using Irish in their lives. Gaelchultúr developed a new interactive online course for learners, called Instant Irish!, that was made available on the Bernard Dunne's Bród Club website during the broadcasting of the TV series of the same name. The short course was aimed at those who have studied Irish in the past but were out of practice, and the focus was primarily on the spoken language.


Over the past ten years we have also done a lot work with public sector bodies. Gaelchultúr has been providing specialised Irish language training to various bodies within the public sector since 2005, but we broke new ground in October 2012 when they first offered the accredited course, the Certificate in Professional Irish, at two levels. Many organisations and individuals expressed an interest in the Certificate in Professional Irish, and in light of the demand for the programme and its success to date, Gaelchultúr decided to offer a course at Level 5 (upper intermediate level) from autumn 2013. A wide range of people have participated in Gaelchultúr’s courses – including Houses of the Oireachtas ushers, TDs and civil servants – all seeking to improve their Irish and provide a higher level of service to the public. It is a source of great pride to us that we now offer the TGG from levels 3 to 6 and that there has been a huge increase in the number of learners in recent years.


We have also done a lot of ground-breaking work in relation to the provision of online resources. Since 2010, for example, we have been continually improving our e-learning website, ranganna.com. E-learning was a relatively new and revolutionary way of learning at the time, and we are very proud of how we have developed our methods over the past 10 years.


We uploaded the first video in the Frása an Lae (Phrase of the Day) series to YouTube in March 2012, and the aim was to teach learners useful phrases that they can use in various contexts. Frása an Lae provided learners with the opportunity to add to their Irish every day, quickly, easily and enjoyably.


At the beginning of January 2013, Gaelchultúr launched a new app to help with learning the lyrics to the national anthem, “Amhrán na bhFiann”. Several years previously, a sporting organisation mentioned to Gaelchultúr that some of its players had difficulty learning the words of the anthem and that’s how we came up with the idea for the app. The singer Alan Burke and the musician John McSherry were happy to take part in the project.


In 2014 Gaelchultúr created Fís agus Foghlaim, a series of videos that aimed to make learning Irish grammar a lot easier and a lot more fun. The videos focus on core grammatical points and an attempt is made to explain them as clearly as possible. These videos are useful to teachers and students at all levels of the education system, as well as the general public. Each video begins with an explanation of a grammatical rule in plain natural language and animations are used to demonstrate their usage clearly and visually. There is a short interactive exercise at the end of each video to enable the user to test his or her understanding of the rule and to practise using it. 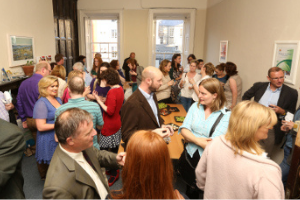 At an event which took place on 3 September 2013, at Gaelchultúr's headquarters on Clare Street in Dublin, the company's new third-level college, Coláiste na hÉireann, was launched by An Coimisinéir Teanga, Seán Ó Cuirreáin. We were delighted to have achieved this third-level status and we were also extremely proud to be the first Irish language college at this level. We have been offering the Postgraduate Diploma in Translation since 2013, a programme that is at level 9 of the National Framework of Qualifications, and the most popular course of its kind in Ireland.

In 2019, Gaelchultúr began a series of interviews on Facebook Live called Deiseanna Duitse. The aim of these programmes is to make the public aware of the employment opportunities available in the Irish language and to motivate people to improve their skills in the language so that they can take advantage of those opportunities. Each programme includes people working in positions in which the emphasis is on high-level language skills. A lot of opportunities are coming up these days but it is hard to keep abreast of the news about those opportunities and Deiseanna Duitse is an attempt to tackle that particular problem.


Which brings us, finally, to 2020! This year Covid-19 has disrupted all aspects of life, including education, but because of Coláiste na hÉireann/Gaelchultúr’s many years of experience of online teaching, the institute was still able to offer many courses online this year – despite the restrictions that were in place throughout the country. As there had been an online element in the course from the beginning, Postgraduate Diploma in Translation students completed semester 2 of the programme last summer without difficulty, and our 2020-2021 course is currently being run entirely online. Finally, although we had to postpone it in the spring, we are delighted that the (online) graduation ceremony for our 2018-2019 DISA intake will take place on 5 December!

As you can see, we've been very busy over the past ten years and Nuachtlitir Ghaelchultúir has been there to keep you all informed of the excellent events and courses that we have been organising. We're delighted to celebrate edition #50 - here's to the next 50!